Although the main thrust of the research has been around the patriarch Joachim Heinrich Martens he was by no means the first Martens to come to the country. As far as can be established the order of arrivals of the various patriarchs was as follows:

MAARTEN (OR MR. ) MAARTENS was born in Gryskerk in the Netherlands about 1654 and got married in Drakenstein about 1671. His spouse’s maiden name is not known. They had a daughter, JOHANNA, who was born in 1675. She was married twice, first to Johannes Oosthuizen in Drakenstein on abt. 1698 and after his death in 1730 she married Andreas Duyf.

CHRISTIAAN MARTHIENS was from Hamburg in Germany. In 1699 he was already living in Stellenbosch. Christiaan married MARIA BARTELS (VAN DE KAAB), a widow of Cornelis heren in Stellenbosch on the 24th of April 1701. (Note: This line will not be pursued.)

ANTON MAARTENS came van Celle, Hannover, Germany. He was born c. 1687. He was the son of Jasper Martens en Anna van Deventer. Arrived at the Cape of Good Hope as soldier for the VOC (Vereenigde Oost Indishe Compagnie) in 1710. In 1712 he leaves the employ of the VOC and becomes a Burgher. He worked as a shoemaker in Cape Town working for Basilius Kretzschmar. On the 6 August 1715 he married SARA CLAASEN MOLLER, daughter of Johan Claus Moller of Hamburg. On the 15 Dec 1720 he got remarried to HERMINA HERWIG of Amsterdam (widow of his boss, Basilius Kretzschmar). Anton died in c.1725. His legacy of the Maartens name would be continued through his sons ANTONIE AND JASPER.

CORNELIS MAARTENS came to the Cape of Good Hope from Beerewyk in the Netherlands. On the 25th of October 1711 he married SUSANNA VAN MADAGASKAR, probably a slave girl. (Note: Nothing more is known about him.)

A.K.A. DIETRICH MAARTENSON. He came here from a small town, Flensburg, on the border between Germany and Denmark. He was a soldier for the VOC between 1730 and 1732 and after 1732 worked as a shoemaker in the Cape. On the 28 Nov 1734 he MARRIED JOHANNA VISSER. Her parents were COENRAAD VISSER born in 1660 in Ommen, Nederland ] & CATHARINA EVERTS VAN ER ZEE born in 1671. Catharina was born on board the ship "Europa", hence the name “van er zee”added to her surname of Everts. After the death of Dirk Maartens, Johanna remarried Johan Christian Volkman from Pomerania. Dirk and Johanna had two children, a daughter CHRISTINA MARIA MAARTENS and a son JURIANUS GODFRICUS MAARTENS, baptised in Stellenbosch on the 8th of March 1739. (Note: The Maartens lineage through Godfricus Maartens has not been established yet.)

ISAAC MAARTENS came from Amsterdam in the Netherlands and was a Burgher in the Cape. On the 2nd of December 1731 he married HENDRIENA CORS from Amersfoort in the Netherlands. They had three sons, CHRISTIAAN MAARTENS, CORS MAARTENS and JAN MAARTENS. (Note: The Maartens lineage through the sons has not been established yet.)

LOURENS MAARTENS was born abt. 1709 in Christiania, Oslo in Norway. On or about the 11th of February 1739 he married MARTHA VISSER in Stellenbosch, Cape Of Good Hope. From the available sources it would appear that she is the same MARTHA VISSER who was married to DIRK MAARTENS. The timeline supports the theory but proof is still to be provided. Proof of this is moot though, as they had three daughters and thus the MAARTENS name of this line would not be continued.

ERNST MAARTENS came from Hartenberg, a village in Bavaria, Germany. Although listed in “Names of German Immigrants 1652 – 1805”, nothing more is known about him.

JOACHIM HEINRICH MARTENS is the Patriarch who is the primary focus of our research. His date of birth has not been established with supportive proof yet, neither is the exact location of his origins. To date the date of birth is given as somewhere between 1729 and 1733 which would make him a boy/man of between 14 and 20 years old when he came to the Cape of Good Hope in 1747. The following document is a copy of his records from the VOC archives held at Den Haag in the Netherlands. 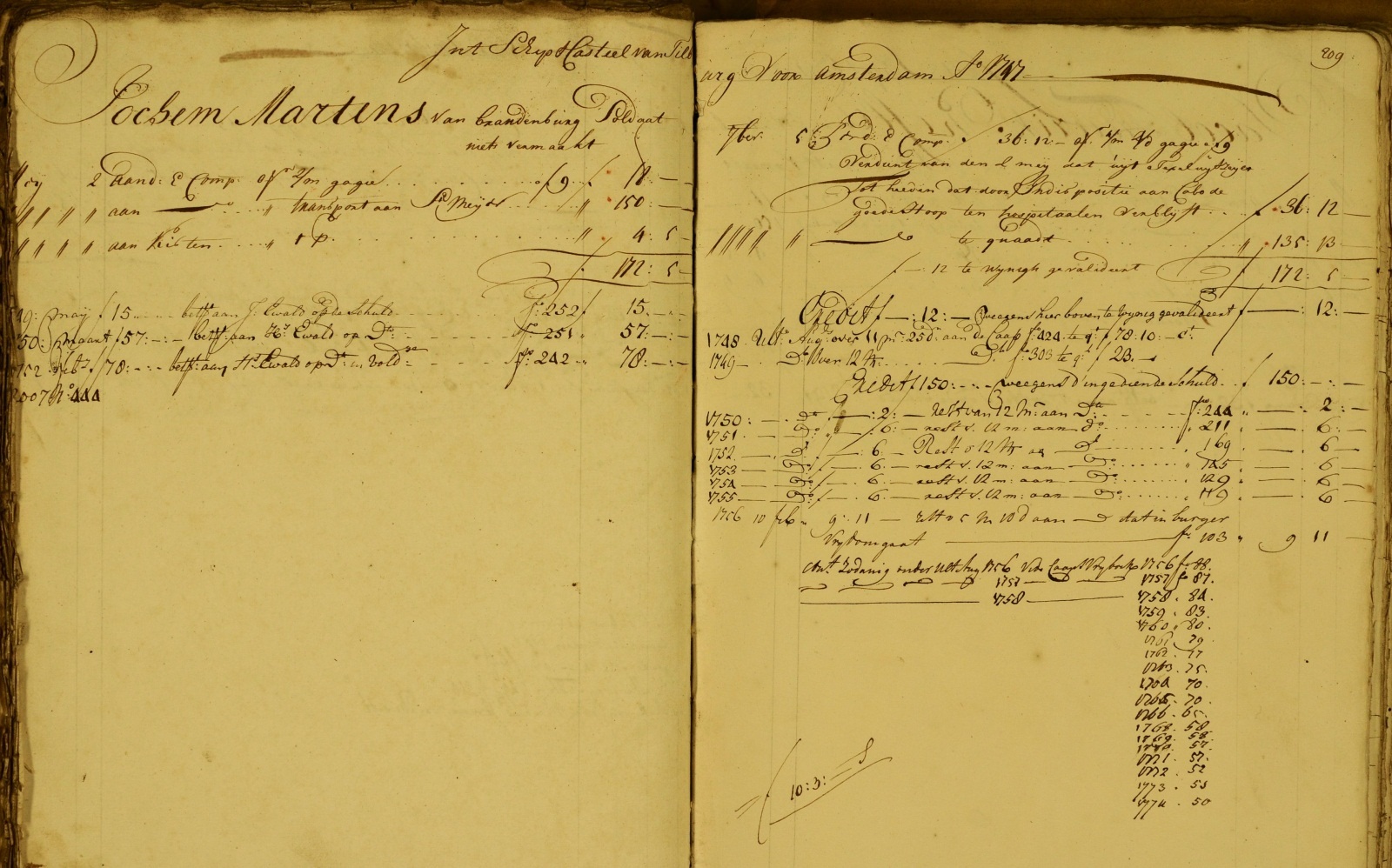 These records of VOC employees are kept in the form of a balance sheet or “soldijboek” with his debts reflected on the left and repayments on the right. From this record we learn a number of things:

1. His name is depicted as “Jochem Martens”.

We do know that his name was Joachim Martens as his second son was named thus. The name Heinrich appears in the Cape service records but his marriage certificate was recorded as follows:

2. He is from the State of Brandenburg in Germany.

Refer to the tab marked “Interesting Background Information” for details of Brandenburg in the 18th century. Suffice it to say that Brandenburg was divided into three main areas or “Marks or Marshes”respectively, namely the Altmark (the Old Marsh) to the East, the Nieumark (or New Marsh) to the West and the Mittelmark (or Middle Marsh) in-between. So, for the time being, we have interpreted the word “Oldenmark” as being in the Altmark region of Brandenburg. The town called “Matsdorp”, however, is providing us with some concerns. The German translation for Matsdorp would be “Matzdorf”. There is such a town, however it lies to the West of Brandenburg and is in the Nieumark. The only town bearing a resemblance is a town called Messdorf in the Altmark and part of the town of Bismarc near Stendal today. Watch this space for further developments!

3.He was recruited by an agent called P Meyerwho would have been responsible for getting him to Amsterdam, lodging him and kitting him out for the voyage. Upon signing up and making his cross (if he could not write) he would have received the equivalent of two months salary at 9 Riyksdaalers per month. The agent received the sum of Rds.150 for the contract and spent a further Rds. 4.50 on his kit leaving him owing the VOC the sum of Rds. 172.50. These agents were called “sielsverkopers” (sellers of souls) by many as the money would be paid over to the agent by the VOC and recovered from the recruit over time until the debt was fully paid. The following illustration depicts a typical agent’s list of recruits complete with their crosses. Note that the crosses really were crosses, rather than the “X” that we have become used to. 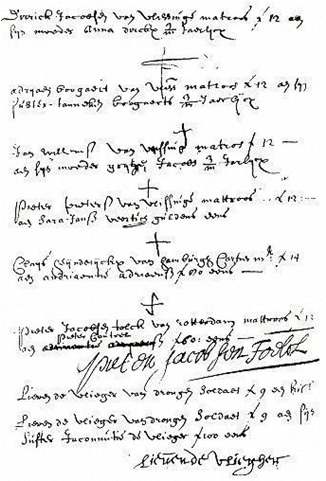 4. He was hospitalized upon his arrival at the Cape of Good Hope (and had to pay for his treatment).

The journey from the Netherlands took around three months by sea in an East Indiaman and was extremely hazardous. Chances were pretty good that the sailors would be suffering from scurvy or any one of a number of dietary diseases or injuries. From TANIP, the VOC resource files on the internet we have learnt that Joachim came over on a ship called the KASTEEL VAN TILBURG, captained by Captain Abraham Zwart. They departed from Texel near Amsterdam on the 2nd of May 1747 with 254 souls onboard. [129 seafarers, 115 soldiers, 2 craftsmen and 8 passengers]. Conditions on board the VOC ships of that era were not conducive to good health and in the 10 years 1740 to 1750 the average number of deaths on these journeys was around 13%. The Kasteel van Tilburg arrived at Kaap de Goede Hoop on the 22nd of August for replenishment after her journey of nearly 4 months and before her departure onwards to Batavia and the world of spice. Heinrich Joachim Martens was one of the 115 “soldiers” on board, of which 35 would remain at the Cape of Good Hope together with 5 of the passengers.  Although he was denoted “soldier”, it was common for all VOC employees without an appointment to carry that title.  Thus even a doctor would have been denoted as a soldier until such time as he received his letter of appointment.  On the 12th of September, re-equipped with fresh food, water and some additional crew, the Kasteel van Tilburg departed for the final part of her journey to Batavia which she would not reach until the 2nd of December. When Heinrich Joachim stepped off the ship 6 sailors had died and a further 26 were landed because of disease.

We know that Joachim became a Burgher in 1756.

In the first case there is reference to folio 103 of the incoming documentrs from the Cape where his Vryburger contract would be.

What we can derive from these entries is that Jochem Martens had an acount, and thus debt with the VOC from 1756 t/m 1774 ‘with the exception of 1767. So he regularly bought on acount with the VOC like many other Vryburghers.

Each Burgher in the Cape had to file an “opgaaf” for the "kwartaalstate" annually giving account not only of the members in his household but also of all his possessions for taxation purposes. As the last opgaaf was made in 1774 it must be assumed that he died between 1774 and 1775. An examination of the actual kwartaalstate in the Cape Town Archives also indicate that he did not own any cattle or ground, that was taxable, for the entire period.

JOHANN MARTENS came from Rostok in Germany that today is part of Hlavni mesto Praha in the Czech Republic. Although listed in “Names of German Immigrants 1652 – 1805”, nothing more is known about him.

Carl Philipp Martens was born in Cele in Germany that today is in the Republika Srpska, Bosnia and Herzegovina. Although listed in “Names of German Immigrants 1652 – 1805”, nothing more is known about him.

[This report is to be updated on a monthly basis as the information base grows.]

Ways you can contribute